News
Lost wheelie bin? Then pay for it

Families who lose their wheelie bins will soon be expected to shell out for a replacement, under proposals being considered by Sandwell Council.

After several requests Sparkhill still doesn’t have wheelie bins resulting in cats and foxes ripping up rubbish bags leaving rubbish on Lyons grove attracting even more mice and rats than before..

A question I am still being asked on a regular basis is by more and more residents is “when can I have my wheelie bins”. With elections now safely out of the way, and exactly a year after a pilot scheme in Harborne and Brandwood was launched, today the wheelie bin roll out for the rest of the city began.

More green bags photographed in Edgbaston this afternoon – just one of four piles we saw close together.

How come the bin men can come along at 4.10am in the morning taking rubbish out of bins piling it all up banging the lids i thought the idea of wheelie bins was to stop piles of rubbish also i thought they was not starting work till 6.45am… The team have been very busy campaigning in Edgbaston to re-elect Fergus Robinson. 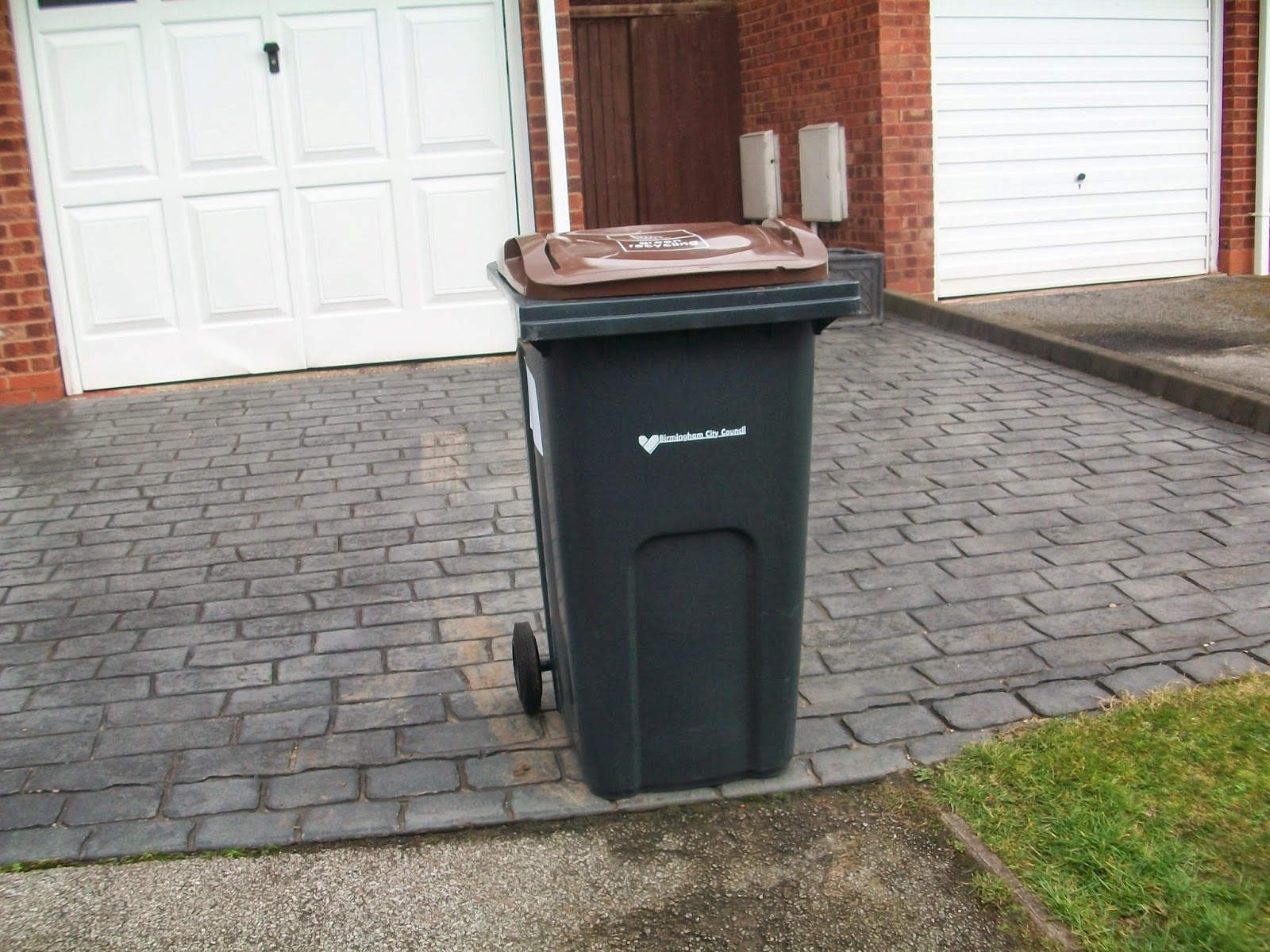 I have been asked again by a few Oscott residents recently where the Wheelie bins they are going to receive will be made as they have heard the bins will all be foreign made. 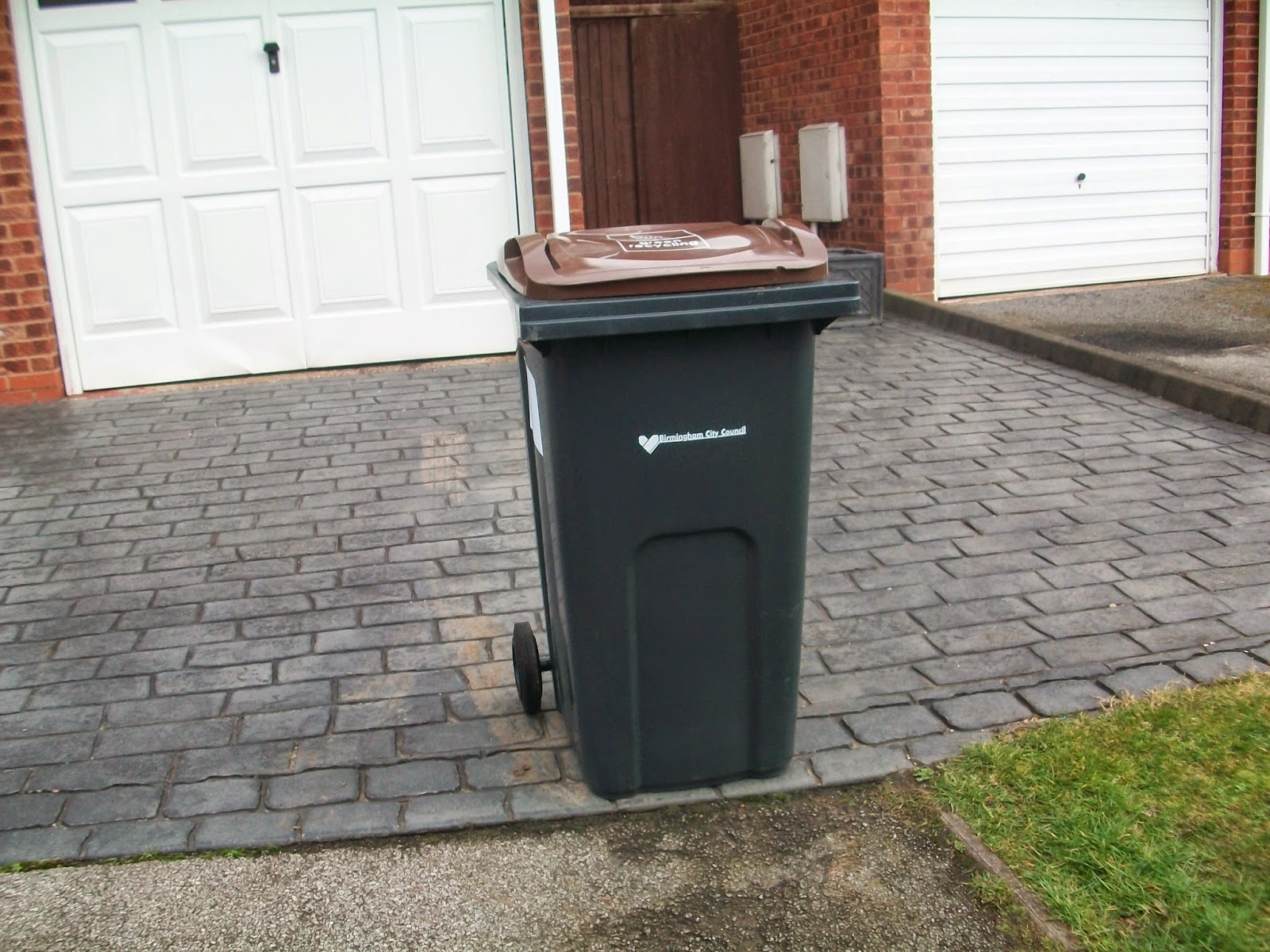 I have been receiving a number of complaints about teething problems in regards to the new Green waste service and these should not be shied away from.

Blog politics
99.7% OF WHEELIE BINS TO BE MADE IN UK

I have been asked by a few Oscott residents today where the Wheelie bins will be made.

The public open space between Lakeside Road, Norbury Road and Heronville Road is becoming an eyesore.

Today was the first paid for garden waste collection where I live in Harborne.

Blog politics
Where Are The Green Wheelie Bins?

Putting out green garden waste in bags for free collection has been stopped by Labour in Birmingham.

A £20,000 benefit cheat who claimed he could only walk a few metres but was captured on film walking his dog, lifting a wheelbarrow into a car and moving wheelie bins, has had his sentence reduced on appeal.

He claimed he could only walk a few metres in order to claim disability benefits and was confined to his home – but Alan Sheard was caught on film walking his dog, lifting a wheelbarrow into a car and moving wheelie bins to swindle almost £20,000.

Top Birmingham City Council Stories: Germans bag Brum wheelie bins order (Birmingham Mail) The Germans are to make 3,000 large wheelie bins for BCC – but the remaining 99.7 per cent of the council’s new bins will be made in the UK Families…

News
Birmingham’s 3,000 large wheelie bins to be made in Germany Cllr James McKay, Cabinet Member for a Green, Safe and Smart City, blogs with an update on the plans to roll out wheelie bins to households across Birmingham… Ever since we announced the plan to modernise Birmingham’s refuse collection system…

On Friday 15 January Valerie went on a walkabout and met with constituents who raised issues from street cleaning to planning.

News
Telegraph Letters: ‘Talk about creating work for the sake of it’

It’s our rubbish collection day and as we missed out on a collection on Christmas Day we were allowed to put extra bags out.

For someone who is supposed to be a political journalist, Paul Dale seems to be slightly confused about the timetable for the roll out of wheelie bins in Birmingham. Blog feature
BSARA look into a hole in the road

I happened to see a copy of a Weoley Labour News on a colleague’s desk today – and it contained a really surprising statement on the front page.

Arsonists are targeting wheelie bins in the latest spate of fires in recent weeks.

Blog politics
WHEN ARE OSCOTT RESIDENTS GETTING THEIR WHEELIE BINS?

News
‘Unhealthy obsession with health and safety culture is nauseating’

Wheelie bins have been torched near homes in a spate of arson attacks, police revealed today.

Aiden Elmore was jailed for life after being told it was purely a matter of chance that more victims were not killed when he used wheelie bins as a barricade to block a rear exit from the flats.

News
Man To Be Sentenced For Fire Death

Daniel Martin, 25, pleaded guilty last May to the manslaughter of Andrew Heath, whose body was found by emergency crews called out to the fire in Chedworth Close, Warndon.

There was an interesting debate about Labour’s garden waste charge (£35 if you want a green wheelie bin) at yesterday’s Council meeting.

I am still getting complaints from some residents that they are not aware what is going on regarding the changes in green waste collections and the introduction of wheelie bins.

A man fled his house through a rear window today after arsonists set fire to wheelie bins outside his home – having targeted a property 200 yards away just minutes earlier.

Wheelie bins left in street to deliberately block legitimate and legal parking by owner of number 21, The Cloisters.

“At an early-bird price of £30, the service offers a inexpensive, convenient and environmentally-friendly way for people to dispose of their garden recycling, and I would urge households to take advantage of the discount offer while it is …

News
Thousands more wheelie bins to be sent out across Dudley

Thousands more homes across Dudley will be receiving wheelie bins for household rubbish from next month.

I have attended residents’ meetings in the Woodview and Tally Ho! areas of the ward during the past couple of days.

The Conservatives’ request for a call in on the Cabinet decision about the roll out of wheelie bins across the city was heard at Scrutiny this morning.

As the wheelie bin report goes to Cabinet today, there is a timely article in today’s Birmingham Mail, pointing out just how much more comprehensive the Conservative’s survey on wheelie bins was, than the Council one.

Next Monday, the cabinet of Birmingham City Council will meet and agree the roll out programme for wheelie bins across Birmingham.

Anyone wanting to know more about the plan to introduce wheelie bins on a city-wide basis to Birmingham can take part in the latest Birmingham City Council webchat on September 16.