A Most Romantic Place

Our holiday book of choice this year has been The Island by Victoria Hislop, a story discovered by Darrell, which is set in Elounda, where we are staying, the island of Spinalonga which was a leper colony until 1957, Agios Nikolaos (where we’ve ...

British red phone box in Bayeux I’ve been to France for a week – well Normandy really.

Our Cretan Breakfast Of Choice

Darrell’s frequent trips to the local supermarket have brought us the most wonderful breakfasts of a Cretan type nature each morning ……..

King Of The Lunchbox

Bless him, when it comes to all things of a Cretan lunchbox type nature Darrell has not been found wanting.

We have received news that ‘I Believe’ by Yolanda Adams will be screened at the Vagabond Film Festival as part of Deaf Culture into Light, a showcase of short deaf films.

A Grand Day Out

Though Darrell has been putting together the most excellent lunch bags for our delectation each day, it wouldn’t be a Greek Odyssey without the odd beach comestible …….

Our Most Favourite Flag

Naturally the Union Jack (Flag) is our most favourite flag of a national type nature …… ……. 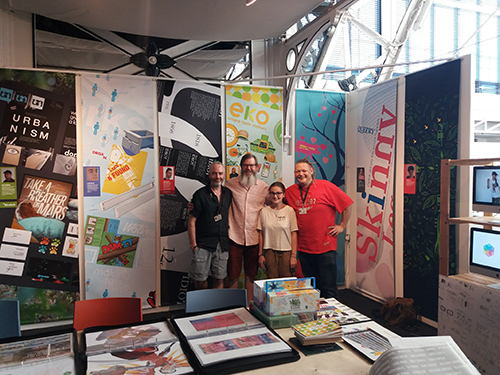 The Visual Communication Department at the University of Wolverhampton exhibited at New Designers, Show Two; the annual showcase of the best new talent from graduating students.

The Truth Will Always Out

We are still a little taken aback by the palatial holiday apartment we have been given at our hotel complex ……..

Best Holiday Must Have Ever……..

Well, I think we have Nigel to thank for our best holiday must have ever this year.

Light House is delighted to announce our latest sponsor – a familiar name in the city: Carvers Building Supplies.

Last night we decided to go for an evening meal at Kalidon, the floating restaurant on the quay that Darrell has had his eye on since we arrived. 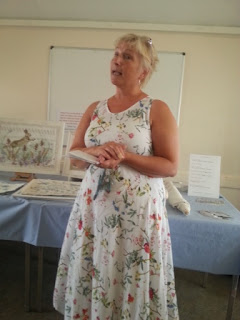 Enchanting embroideries along the coastal path Our July 2018 lecture was a visit from Julie Brand of Tigley Textiles.

We Do Love A Greek Church

As you know, we love a Greek church and as such we have been checking each day to see if the church we spotted in the middle of Elounda is open so that we could have a little peek inside and then light a candle, a long held Greek odyssey tradition...

A Bit Of Sculptural Culture In Agios Nikolaos

We think we must have done a big circle round Agios Nikolaos during our day there, until our feet got the better of us and we could walk no further.

I have to say that Nigel has quite an art for finding the quaint and quirky of a Greek café type nature.

The Tank War by Mark Urban

This is a book I read whilst holidaying on Normandy recently and a good read it is too.

As there were a few storm clouds over Elounda we decided to leave “our” beach for a short getting a taxi to explore the pleasures of Agios Nikilaos round the bay……..

District Governor Ashley Gray joins us at this evenings meeting to share Rotary International President Barry Rassin’s theme for the new 2018-19 year - Be the Inspiration.

The Elephants In The Room

The covers on the sofa/beds in our holiday apartment lounge area have a very definite African theme to them, which Darrell says must be a current, de rigueur, must have in Greece ……… …… but to be honest I just can’t see it, Greece is just...

I couldn’t help noticing that sometimes Darrell drifts off into his own little world when gazing far across unbelievably blue sea to the mountains.

Crete Brings About A Change In An Almost Implacable Holiday Habit …….

Partaking in a pre and apres dinner cocktail has always been very much part of our holidays of a foreign type nature …….

I have a sort of feeling that this is going to be a holidays of swings and roundabouts as regards to our fortunes ……….

I have to admit that when we arrived at our hotel at stupid o’clock this morning, we were all totally incapable of taking anything in, we just went into what we thought was “the bedroom” and collapsed on either one of the twin beds.

And So …… Our Crete Odyssey Begins

The eagles have landed …….

A Wolverhampton Development Of A Bus Type Nature …..

We’re staying with Lu for a couple of days before we jet off to the hotter climes of Crete as her house is very convenient for the airport and while we are here , well, Nigel just couldn’t resist a trip into Wolverhampton on the bus to see what...

Passports – check, EHIC cards – check, an ample sufficiency of euros and a few pounds for emergencies and the airport – check ……… ……..

The Times They Are A-changing

Well, after much planning and the poring over of plans, Darrell and Nigel’s room has been emptied ……… …… and The Towers is now full of the carcasses of new drawer units, cupboard and shelves and all the other paraphernalia that goes with ...

Emma visits Wolverhampton Festival of Food and Drink which sees attendance increase to over 25,000

Emma Reynolds, Labour MP for Wolverhampton North East, visited the City of Wolverhampton Festival of Food and Drink which was attended by over 25,000 – up by almost 7,000 people on the inaugural event last year.

Emma congratulates all the volunteers involved in Wednesfield in Bloom 2018

Emma Reynolds, Labour MP for Wolverhampton North East, visited Wednesfield to support Wednesfield in Bloom during the day that Heart of England in Bloom judges were there.

Emma visits Wednesfield in Bloom to congratulate the many volunteers involved

Emma Reynolds, Labour MP for Wolverhampton North East, has visited Wednesfield to see this year’s display and to meet with volunteers.

Emma Reynolds, Labour MP for Wolverhampton North East, is celebrating the 70th anniversary of the NHS on Thursday 5 July.

Emma Reynolds, Labour MP for Wolverhampton North East, has called on the government to provide clarity over its Brexit plans to end the damaging uncertainty being caused to businesses in Wolverhampton across the UK.

Emma Reynolds, Labour MP for Wolverhampton North East, has voted against government plans to expand Heathrow after the Transport Secretary admitted – and the government’s own figures showed – that there will be fewer flights to Birmingham ...

On the occasion of Windrush Day, Emma Reynolds, Labour MP for Wolverhampton North East attended the Windrush 70 exhibition at Wolverhampton Art Gallery to celebrate the 70th anniversary of the arrival of the HMT Empire Windrush at Tilbury Docks – ...

Emma Reynolds, Labour MP for Wolverhampton North East has questioned the government over affordable rents and the lack of affordable social housing.

On Friday, 22 June, Emma is urging the community to come together to celebrate the life of Jo Cox by attending her ‘Great Get Together Tea Party’ she is holding at her constituency office.

Emma Reynolds, Labour MP for Wolverhampton North East, went along to celebrate the collective achievements of pupils from across the city who were taking part in ‘Go Run For Free’.

Emma sends her best wishes to those celebrating Eid al-Fitr

Emma Reynolds, Labour MP for Wolverhampton North East has sent her best wishes to Muslims across the world marking the end of Ramadan.

Emma’s statement on the passage of the EU Withdrawal Bill

Emma Reynolds, Labour MP for Wolverhampton North East has today issued a statement ahead of the coming votes on the EU Withdrawal Bill.

Emma Reynolds, Labour MP for Wolverhampton North East is encouraging local people and groups to celebrate the role of carers during Carers’ Week which runs from 11-17 June 2018.

Emma Reynolds, Labour MP for Wolverhampton North East has signed a book of remembrance in the House of Commons to commemorate the thousands of members of the Sikh faith who lost their lives in the Golden Temple Massacre in 1984.

In May the government announced that due to a technical issue dating back to 2009 which was only identified this year some women in England were denied the last of their invitations for breast cancer screening.

Emma Reynolds, MP for Wolverhampton North East has today said how saddened she is by the news that House of Frazer will close its store in Wolverhampton.

Emma Reynolds, Labour MP for Wolverhampton North East, has expressed disappointment after the broadcaster Channel 4 rejected a bid from Wolverhampton to be the home of one of two new creative hubs.

Emma Reynolds, Labour MP for Wolverhampton North East will be hosting an event at her constituency office on Friday 22 June 2018 as part of the ‘Great Get Together’ to celebrate the life of Jo Cox.

Emma Reynolds, MP for Wolverhampton North East is supporting Dementia Awareness Week to highlight the support available to those living with dementia.

Emma Reynolds, Labour MP for Wolverhampton North East, is supporting Mental Health Awareness Week which runs until the 20 May 2018.

Tomorrow, Saturday, 12 May at 12pm, Emma Reynolds, MP for Wolverhampton North East will be taking part in a Bikeathon.

City of Wolverhampton Council has signed an agreement to mark a new partnership with Trade Unions to encourage the importance of health and safety in the workplace.

An Evening with Dennis Skinner

A Summer Double Feature with The Discoverers and Take a Bow

Eden Support presents a Summer Double Feature with The Discoverers and Take a Bow Drama groups.

Join Howling Wolves the Community Chir for their annual summer concert, bringing you a special night of unforgettable voice and harmonies.

Light House is delighted to announce our latest sponsor – a familiar name in the city: Carvers Building Supplies.

Join us this summer for a dino-tastic morning of dinosaur crafts, fossil making, fun facts, story-telling at Newhampton Arts Centre.

Children and teenagers can make friends, have fun and develop some great new skills these summer drama clubs run by Stagecoach.

Shine a Light On

This is a music workshop run by RML that is open to all Wolverhampton students, giving them the chance to learn instruments and play live in the end of workshop performance.

Aspire for Excellence’s summer play scheme will keep your children busy and safe during working hours.

SOUND OF THE SIRENS

SOUND OF THE SIRENS   Exeter-based duo Abbe Martin and Hannah Wood dovetail beautifully on their debut album For All Our Sins which was released in 2017 to wide praise including from R2 Magazine who called it a “stunning debut collection”.

Comfortably in his forties, award-winning comedian & new dad Wool delves into his back catalogue of material spanning 25 years to perform some of his more subversive routines.

Ethan Hunt and his IMF team, along with some familiar allies, race against time after a mission has gone wrong.

On Saturday 23rd June, around 60 artists went out to Wolverhampton City Centre and Whitmore Reans to paint the wonders of the area on the lovely summer’s day.

As part of this year’s Scifest, Light House is bringing you Ridley Scott’s classic film Alien.

Before our afternoon subtitled screnings of Mamma Mia: Here We Go Again! (2.15pm) & Peter Rabbit (2.30pm) there will be community singing of Easy favourites in the courtyard, from The Carpenters to Neil Diamond, in the style of our mistletoe and mulled...

Join us for a singalong version of the smash hit musical starring Ryan Gosling and Emma Stone.

The University of Wolverhampton presents an all age celebration of science, tech, engineering and maths plus performances, music and stand up at venues across the city.

ACTive Drama & Dance School Week by NAC Summer workshops by ACTs acting school are set to give your children creative fun in one explosive week.

The Greatest Shows This is Me

Star-Struck Theatre Company presents a night of music from the very best of stage and screen.